One of the keys to a successful event is creating dynamic marketing communications to promote it, along with effective collateral material to help ensure the event is executed successfully. Branding is an investment that will pay off. This may include a logo, graphics for social media, email and web, direct mail, posters and large format graphics — whatever it takes to engage your target audience!

SASC's 30th Anniversary and Gala
In 2019, Sexual Assault Support Centre of Waterloo Region celebrates "30 years of resilience, healing and hope." The anniversary tagline, "Nevertheless, We Persist", speaks to the centre's commitment to support survivors to a place beyond uncertainty, discouragement and aloneness. The anniversary theme is integrated into the SASC logo, which will appear throughout 2019, including on the poster for this Fall's anniversary gala, "Cheers to 30 Years."  Visit sascwr.org to learn more about SASC and what is planned for this milestone year.

Backyard Theatre's "The Other Side of the Mountain"
While much of the promotion for Backyard Theatre's new Fall production happens online, there is still a need for print. In addition to the website, I designed a poster and a postcard-sized handout. This was a good time to give the Backyard Theatre logo a makeover. It retains the graphic elements and overall shape of the original design, but now has a more refined look.

Fairview Seniors Community Anniversary Fundraiser
The theme for Fairview and Parkwood Seniors Community's fundraiser is Advancing Dementia Care and the event is named "More Than Memories – Seeing Beyond Dementia." Drawing on the exiting branding, I designed a logo, save-the-date postcard, posters and ticket.

SASC's 2016 Gala – Cirque du SASC
I again had the privilege of designing the graphics for the Sexual Assault Support Centre's annual gala at The Tannery Event Centre in Kitchener on Saturday, November 12 – posters, online graphics, ad, the program and banners for The Tannery's projection screens. It was a fun and successful evening!

Wade Antenna – Going Above and Beyond
Wade Antenna recently introduced new vision, mission, purpose and core values statements to guide their business. For their launch event, I designed the invitation, posters, banners, agenda and a pledge card under the theme "Going Above and Beyond." The dramatic blue sky image reflects Wade's position as a leader in the design and production of towers and antennas. 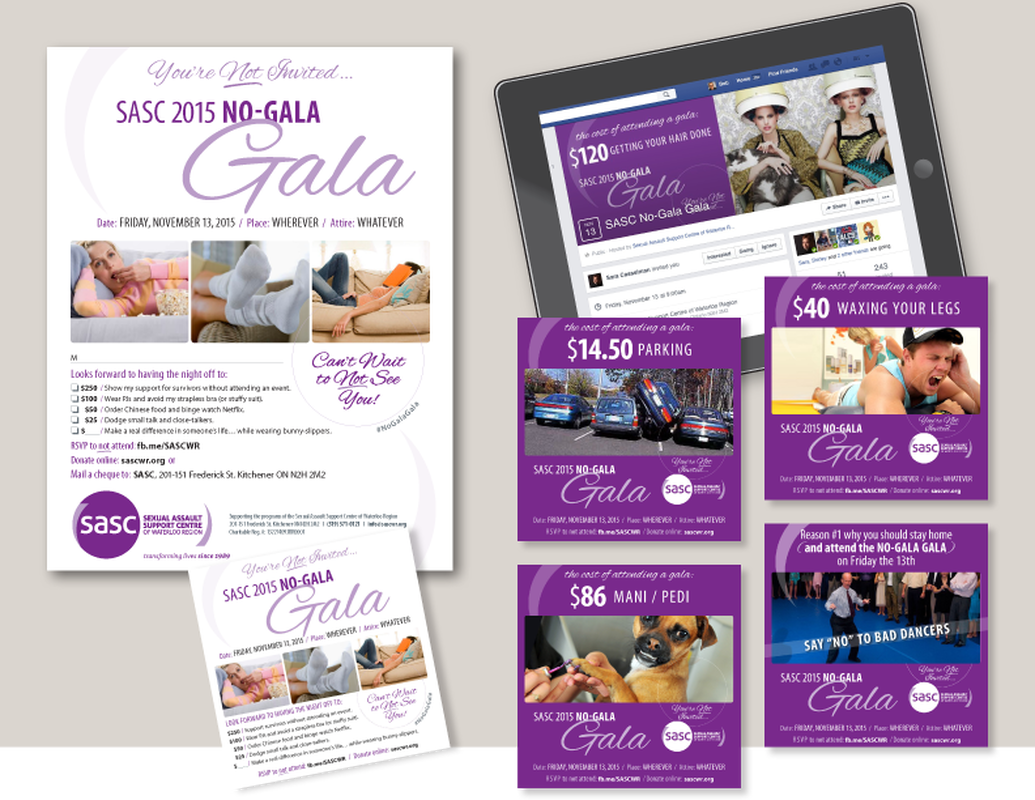 SASC No-Gala Gala
SASC is doing something different for this year's gala: they're not having one! Because the fundraising component of the annual event is important, they have reached out to supporters, inviting them to participate by not attending the "No-Gala Gala" but providing opportunities to donate. The tongue-in-cheek theme includes statements like "You're Not Invited" and "Can't Wait to Not See You!" The social media campaign includes a series of funny Facebook meme's highlighting the benefits of not attending a gala. 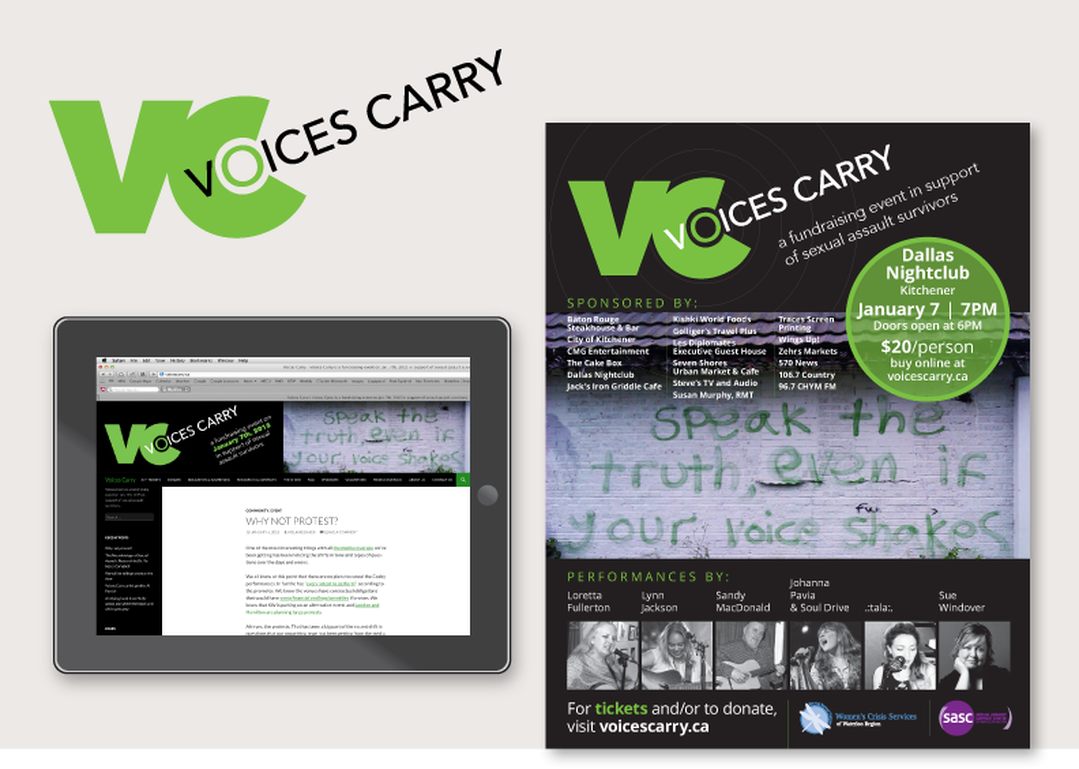 Voices Carry Fundraising Event
I designed the branding for this event on January 7, 2015, including a logo, poster, website banner and Twitter graphics. As described by the organizers, "Voices Carry is a fundraising event to benefit Women's Crisis Services and the Sexual Assault Support Centre in Waterloo Region. The event was catalyzed by the Cosby performance at Centre in the Square, also on January 7th, and the desire to show support for survivors of sexual violence and send a positive message." 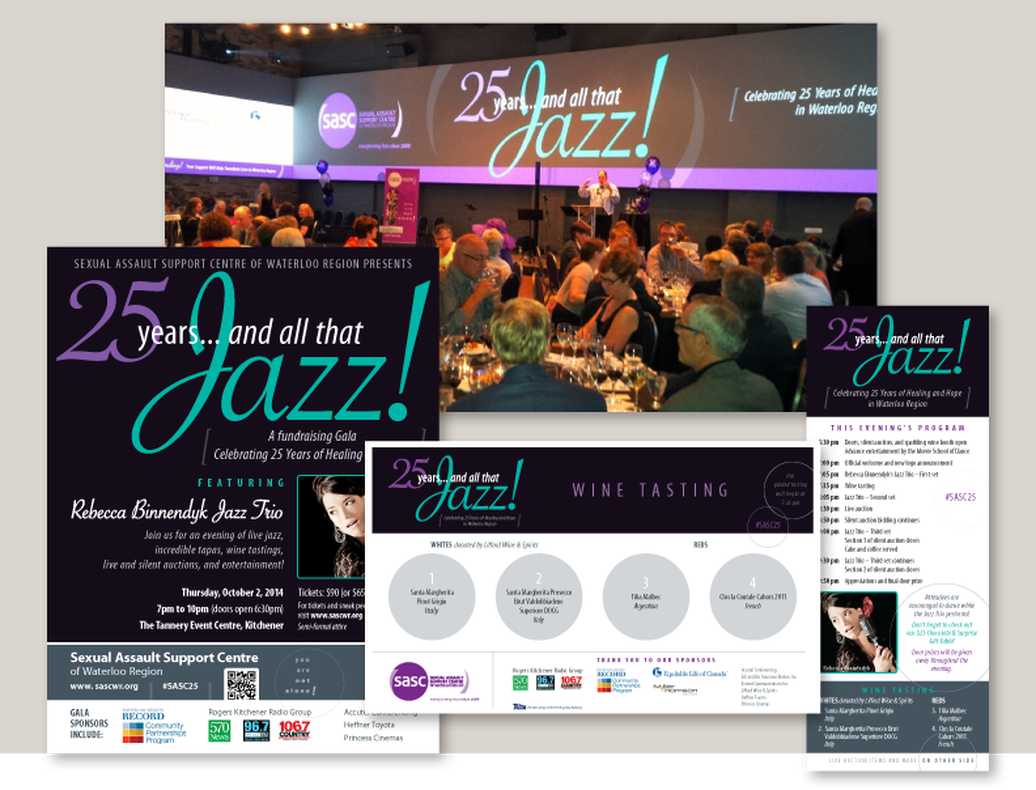 SASC 25th Anniversary Gala
2014 is the 25th anniversary of the Sexual Assault Support Centre of Waterloo Region. To celebrate, the centre hosted a fundraising gala on October 2 at The Tannery Event Centre in Kitchener. The theme was "25 Years and All That Jazz — Celebrating 25 Years of Healing and Hope."  To promote the event, I designed a poster, ads to be run at a local cinema, as well as graphics for their website, Facebook page and emails. And for the even itself, I designed the program, wine tasting placemats and graphics for the  large screens that wrap the event centre's walls. 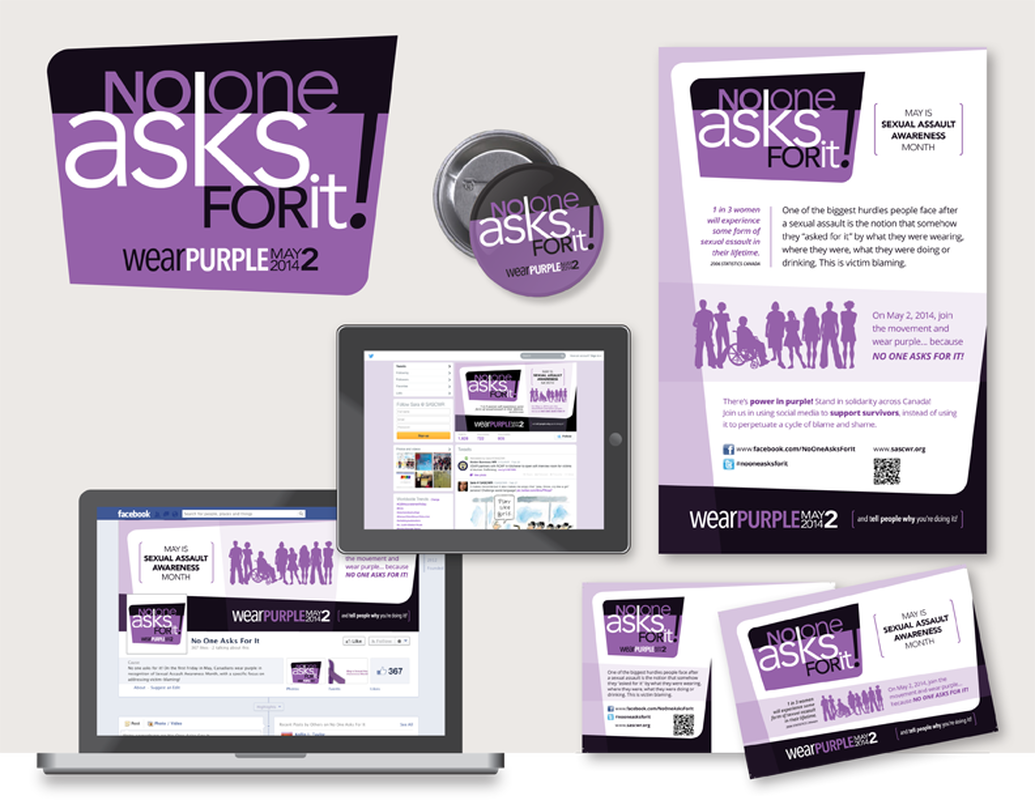 No One Asks for It Campaign
The Sexual Assault Support Centre of Waterloo Region asked me to design a brand identity for the No One Ask for It Campaign. The objective of the campaign is to encourage Canadians to stand in solidarity against victim blaming and use social media to support survivors. In addition to the logo, I designed a variety of print and online tools to support the campaign, including a poster, postcard, Facebook, Twitter and website banners. Graphics files are available on the SASC website, so groups can access them to promote events locally.

Digital Brochure to Promote EMDR Workshop
To promote this two-day workshop, I designed a digital brochure and registration form to be distributed via an email campaign. The project included a coordinating email banner and a graphic to promote the event on the client's website.

Lambrecht Chevrolet Auction Poster
Lambrecht Chevrolet in Pierce, Nebraska was operated by the Lambrecht family from 1946 until 1996. During that time, trade-ins and last year's models were kept rather than sold. A few were stored indoors, but most were left outside to face the brutal Nebraska weather. In September 2013, the inventory about 500 cars was auctioned off. While the cars were weathered and dirty, some had only a few miles on the odometer and had never been sold. I was intrigued by the story and inspired by the photos, so I created this poster for myself.
© Bob Bender Design 2013–2019  /  All rights reserved
Powered by