A well thought-out, dynamic promotion can have a big impact on sales. I'll work with you to develop a strong, memorable theme, then design the support material that will most effectively meet  your objectives, from logos, flyers, posters, invitations, point-of-sale material, Facebook page or website — whatever media will best communicate your message to your target audience.

Le Tour de Spice is Spicing Things Up
If you're looking for a fresh idea to promote your brand, Le Tour de Spice offers customized spice tubes and spice sets to elevate your message in a way that's memorable and also useful. This particular spice tube promotion made a unique gift at an industry golf tournament. Visit LeTourdeSpic.com to see more.

Esta Chocolates Wedding Show Promotion
Weddings are an ever-expanding niche market for Esta Chocolates, with their traditional truffles and their new custom-wrapped square Esta Carré. To support their participation at Canada's Bridal Show in Toronto, I designed a campaign with the theme "Celebrate Your Sweetest Day with Esta Chocolate." The promotion included booth graphics and various hand-outs and samples at the show, as well as a Facebook campaign that included a series of memes. The memes and posters featured whimsical cartoon brides and grooms with a variety of humorous headlines that talked about why Esta Chocolate is the perfect wedding favour. I also created a new Wedding page on the Esta website. Visit estachocolates.com to see more.

Weeden Environments Promotion
Weeden Environment took a novel approach to promoting one of their hard-to-pronounce brands at the London Poultry Show. Guests were invited to enter with a video of them saying "Fienhage." The contest was promoted in series of product flyers, an invitation to the show, and a large format poster for their exhibit. The five winners were announced in a post-show flyer that reached out to everyone who attended and participated.

Golf Without Limits 2017 Tournaments
For their 2017 tournament season, I created a series of eight posters for display inside Golf Without Limit's indoor golf academy. These posters do double duty as Facebook ads. The colourful, eye-catching design follows new branding I designed for them in 2015 and is consistent with the window graphics and other signage. See more promotions. 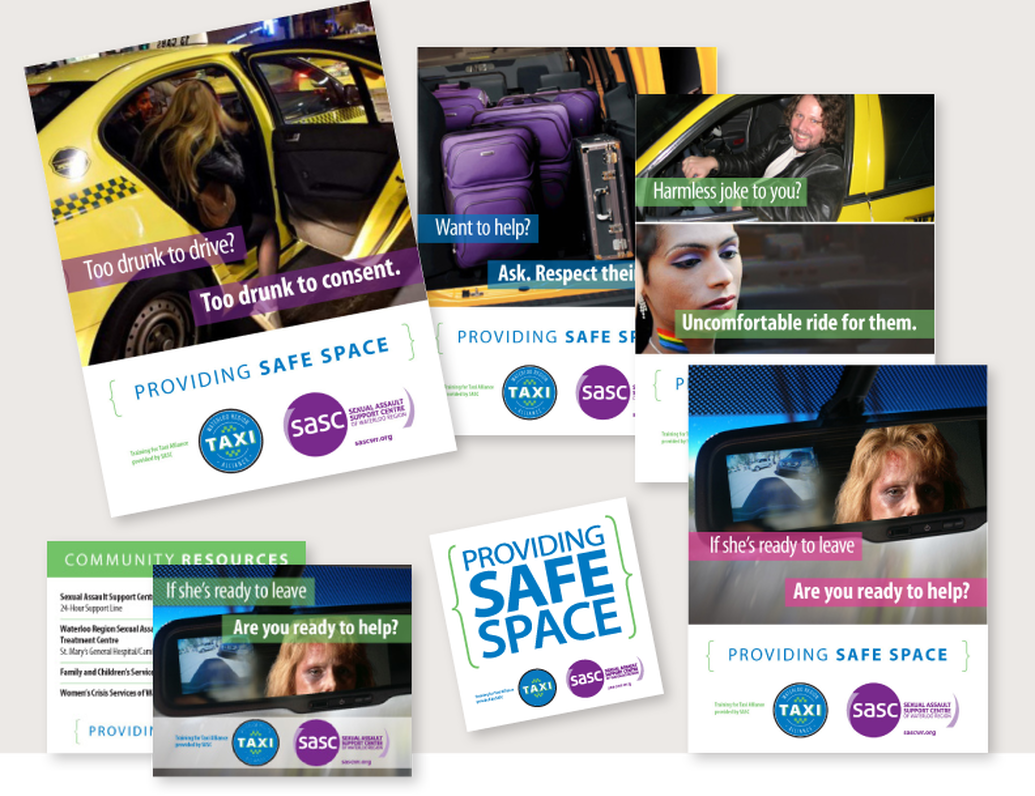 SASC and WRTA — Providing Safe Space Campaign
In cooperation with the Waterloo Region Taxi Association, the Sexual Assault Support Centre of Waterloo Region has developed an online training program that prepares taxi drivers for the challenging situations they often face. The theme is "Providing Safe Space." To promote and support the program, I designed a series of four posters, an information card and a decal for cabs.The posters depict typical scenerios, and headlines that suggest appropriate responses.

Golf Without Limits Brand Refresh and Fall Promotion
Golf Without Limits Indoor Golf Club & Academy in Waterloo offers a realistic, simulated golf course experience, allowing golfers to play all winter long. As the premier indoor golf facility in Waterloo Region, they were looking for an upgraded brand identity that better reflects their market position. I gave their logo a more refined, up to date look, but retained their distinctive golf course graphic, which is established and well recognized. New, standardized typefaces and other distinctive graphic elements create strong, memorable brand markers. GWL kicked off their 2015/2016 season with direct mail campaign in key Kitchener-Waterloo neighbourhoods. The flyer introduces the new look and includes special offer coupons. It's non-standard size and heavy paper stock make sure it stands out. A gift card redesign and upgraded club signage continues the rollout of their fresh new look. 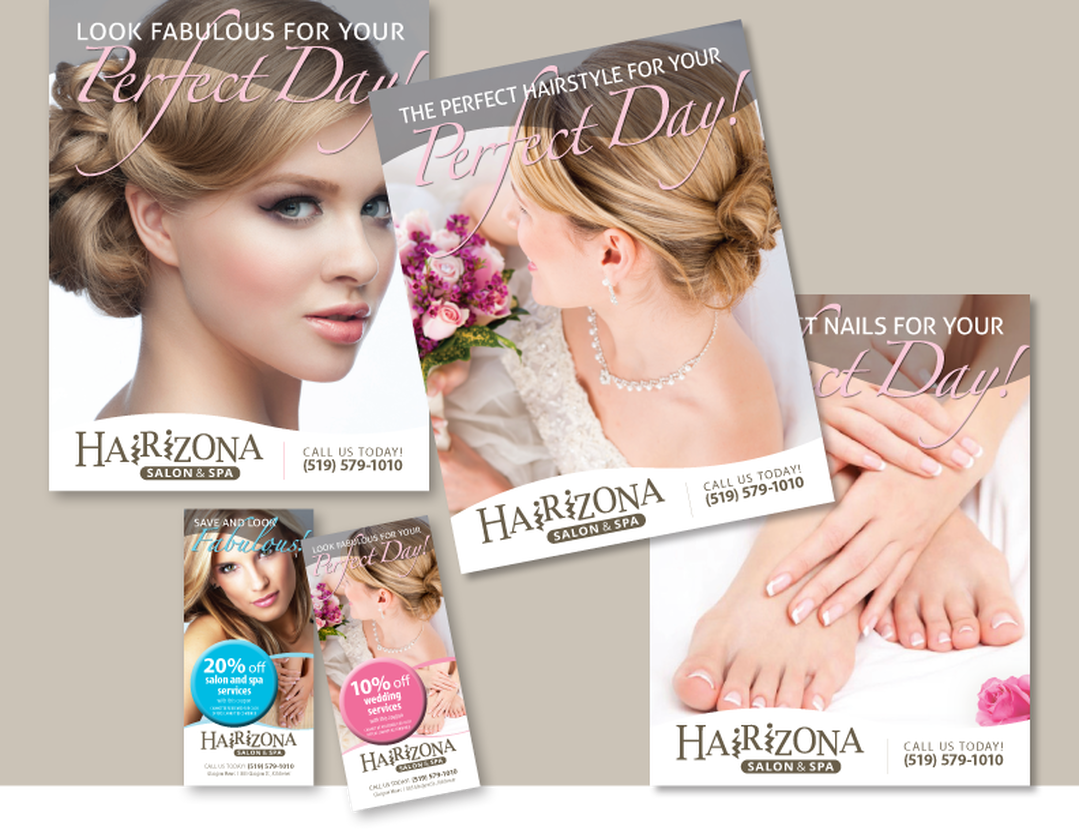 Hairizona Salon and Spa Bridal Show Promotion
The wedding season is a prime opportunity for Hairizona Salon and Spa. I designed posters for their display at the local bridal show, as well as coupons to promote their special offers for wedding parties. The graphics are consistent with the new brand identity I designed for Hairzona in 2013 and reinforces their position as a premium destination for salon and spa services. 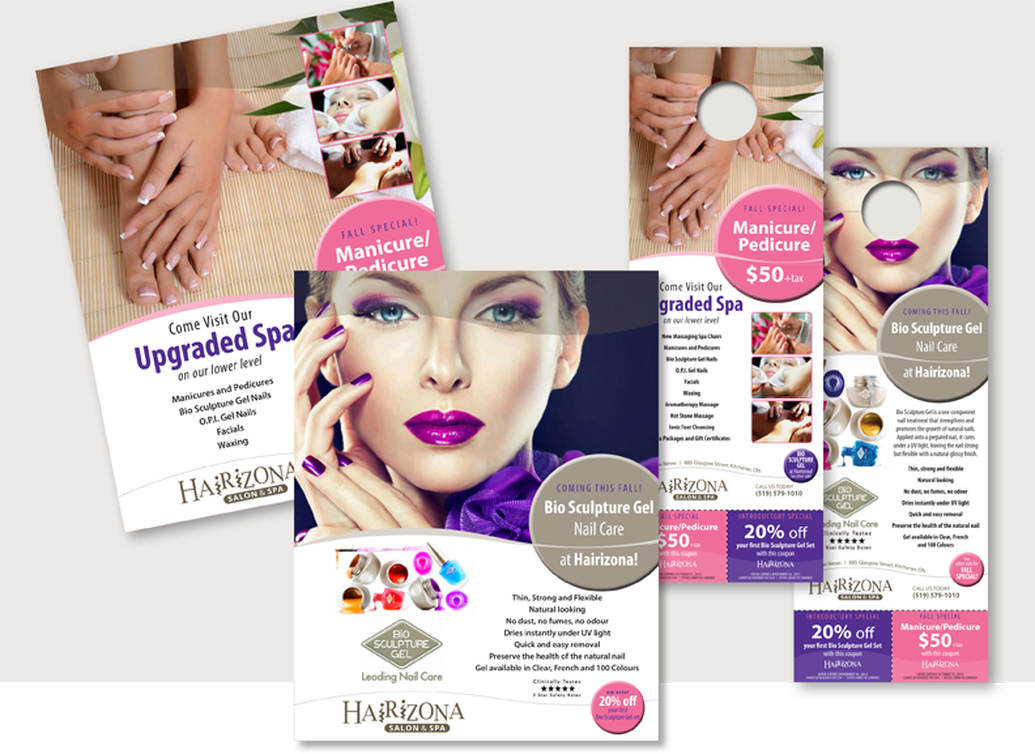 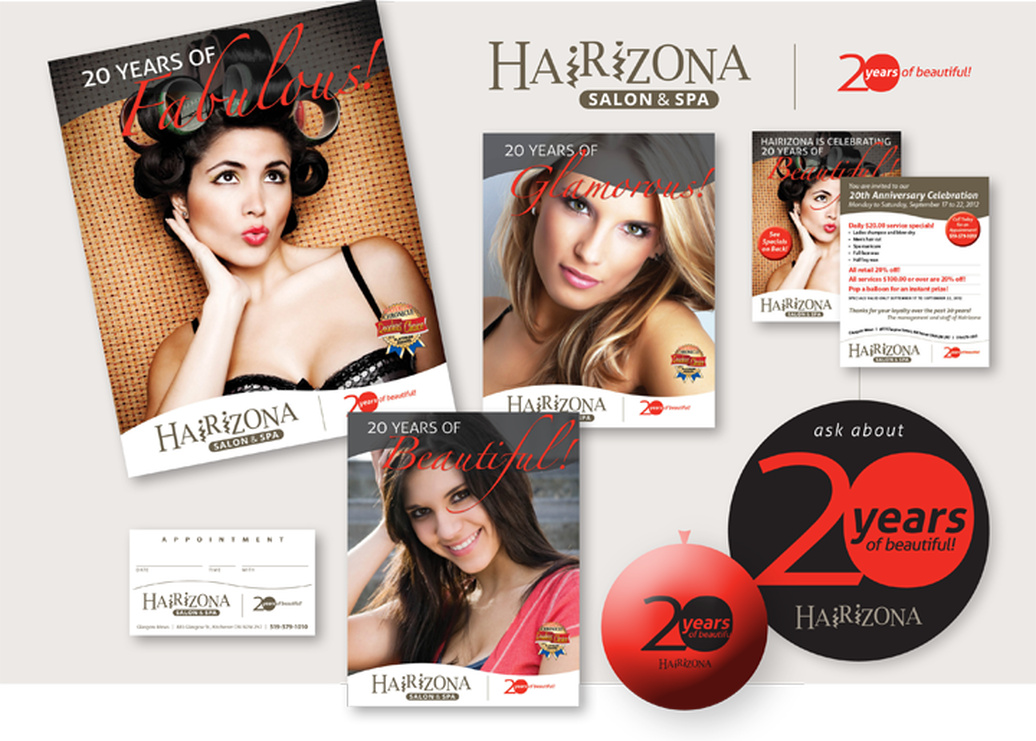